UMLY Environmental and STEM Education Complex - About Us The grounds are open from dawn to dusk, seven days a week for exploration of our walking trails of the preserve. The Cassatt Preserve has over 20-acres of diverse habitats including woodlands, wetlands, a meadow, the headwaters of Darby Creek, plus over 5 miles of trails. Over 130 species of birds have been recorded throughout the preserve. Be sure to explore our offerings including bird walks, hikes, canoeing and more.

END_OF_DOCUMENT_TOKEN_TO_BE_REPLACED The Nature Center, which opened in 1998, is the home of our 19 animal ambassadors. Visitors, campers and students all enjoy meeting our animal ambassadors and learning more about the myriad of insects, reptiles and mammals housed in the Nature Center. From Sparky, our 22-year-old snapping turtle, to Moira Rose, our recently adopted rabbit, there is something for everyone to see and love.

END_OF_DOCUMENT_TOKEN_TO_BE_REPLACED Our barnyard is home to a colorful cast of goats, sheep and chickens. It is a popular destination for visitors to interact with farm animals right here on the Main Line. Throughout the year, our students and campers learn about the importance of farms and the daily work required while enjoying the company of our farm's animal residents.

END_OF_DOCUMENT_TOKEN_TO_BE_REPLACED Our Raptor Center is the home to various species of hawks and owls. All of our resident birds arrived from wildlife rehabilitation centers with a permanent disability that makes them unable to be released back to the wild. They work alongside our raptor care team as educational ambassadors for their wild counterparts.

END_OF_DOCUMENT_TOKEN_TO_BE_REPLACED Our complex has two STEM Labs for all of your scientific needs! Whether it's making elephant toothpaste, building robot courses or testing our favorite candy's floatability, we are having fun with STEM for all ages.

END_OF_DOCUMENT_TOKEN_TO_BE_REPLACED In our Watershed Lab students learn about the importance of water systems including: macroinvertebrates, water testing, stream erosion, plant life and more. With access to the Darby Creek, our watershed lab gives students hands on experience in the study of our water systems.

END_OF_DOCUMENT_TOKEN_TO_BE_REPLACED

More Information about the UMLY Environmental and STEM Education Complex

The Cassatt Mansion was built in 1906-1908 as part of the Cassatt family’s 120-acre summer country estate known as “Kelso”.

J. Gardner Cassatt, a successful banker in Philadelphia, had the estate built as a summer country home, which included the mansion, carriage house, garage, barn and several outbuildings. Cassatt’s daughter, Ellen Mary, and husband Horace Hare, later took ownership of the estate and raised their two children, Gardner and Ellen Mary, here through the 1940s.

The estate was sold in 1950 to the Daylesford Abbey, a Norbertine community of Catholic priests and brothers.

The Daylesford Abbey operated on the campus from 1950 until 1961, when they moved to their current location just down the road.

The Upper Main Line YMCA started in 1962, operating from the T/E Middle School gymnasium. The Y purchased the former Cassatt estate from the Daylesford Abbey and began serving the community from the campus in 1964. 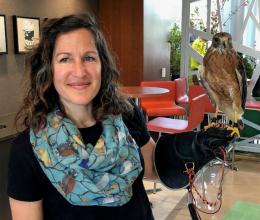 Michelle has been with the Upper Main Line YMCA for 13 years. She began her career with the Y as the lead animal technician, where she was responsible for husbandry, educational programming and training of the center’s 35 animals. Michelle is currently the director of environmental and STEM education.

Michelle studied at World Bird Sanctuary and Avian Behavior International. She is a member of the International Association of Avian Trainers and Educators. Previously she was a trainer and educator at Audubon of Mid-Atlantic (formerly Audubon of PA).

Before moving to Pennsylvania, Michelle was a new business development manager for the McClatchy Newspaper group in South Carolina. At McClatchy, she also worked with Newspapers in Education at area elementary schools. She holds a bachelor’s degree in journalism/public relations from Kutztown University. Michelle is passionate about animals in environmental education and reaching students from all over Chester County.