At the Kennett Area YMCA in Kennett Square, PA, you’ll find a gathering place where families can play together and stay connected, youth and teens can build character values and leadership skills, seniors can find companionship and improve their health and adults can find community, well-being and support. For many, the Y is like a second home.

Our staff has a strong commitment to serving the community. To contact our branch, please call 610-444-9622. To contact a specific member of our staff, please use the contact information listed below: 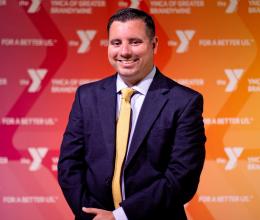 Having begun with the YMCA in 2002, Nic oversees branch operations at the Kennett Area YMCA, as well as serving as the Director of Safety and Risk Management for the YMCA of Greater Brandywine Association.

Prior to his current role, Nic served as Director of Branch Operations at the Lancaster Family YMCA for two years and as Associate Executive Director at the Jennersville YMCA. Here, he managed Jennersville’s day-to-day operations, overseeing membership, programs, childcare, facilities and human resources. During his tenure, membership grew by 16% and revenue increased by 13%. Nic was also overseeing the Octorara YMCA Program Center during this time which provides childcare, before and after school care and summer camp programs.