At the Upper Main Line YMCA located in Berwyn, PA, you’ll find a gathering place where families can play together and stay connected, youth and teens can build character values and leadership skills, seniors can find companionship and improve their health and adults can find community, well-being and support. For many, the Y is like a second home.

Our staff has a strong commitment to serving the community. To contact our branch, please call 610-647-9622. To contact a specific member of our staff, please use the contact information listed below: 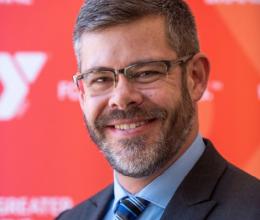 Brian began his career with the YMCA as a camp counselor in 1994 at Camp UMLY. He started the Environmental Education Program, under the guidance of Brad Zerr, former Senior Program Director. Brian served as part-time Environmental Education Coordinator from 1997-2003 while also working as an environmental scientist for a consulting firm. During this time, he built a staff team to create the Nature Center and trail system on the campus, developed the preschool nature program, nature summer camps, Y Earth Service Corps, and Birding programs. He joined UMLY full-time in 2003 as the Associate Youth & Family Director and shortly thereafter became the Youth & Family Director and Camp Director. In 2007, Brian became Senior Program Director of Camp, Environmental Education, Teens, Community Outreach and later added Sports, Arts & Dance, Wellness, Tennis, Childcare, and eventually Aquatics to his oversight.

Brian graduated from Penn State University with a B.S. in Environmental Resource Management and Masters in Environmental Pollution Control.  He lives in West Chester with his wife, Lindsay, and children, Will and Hannah.